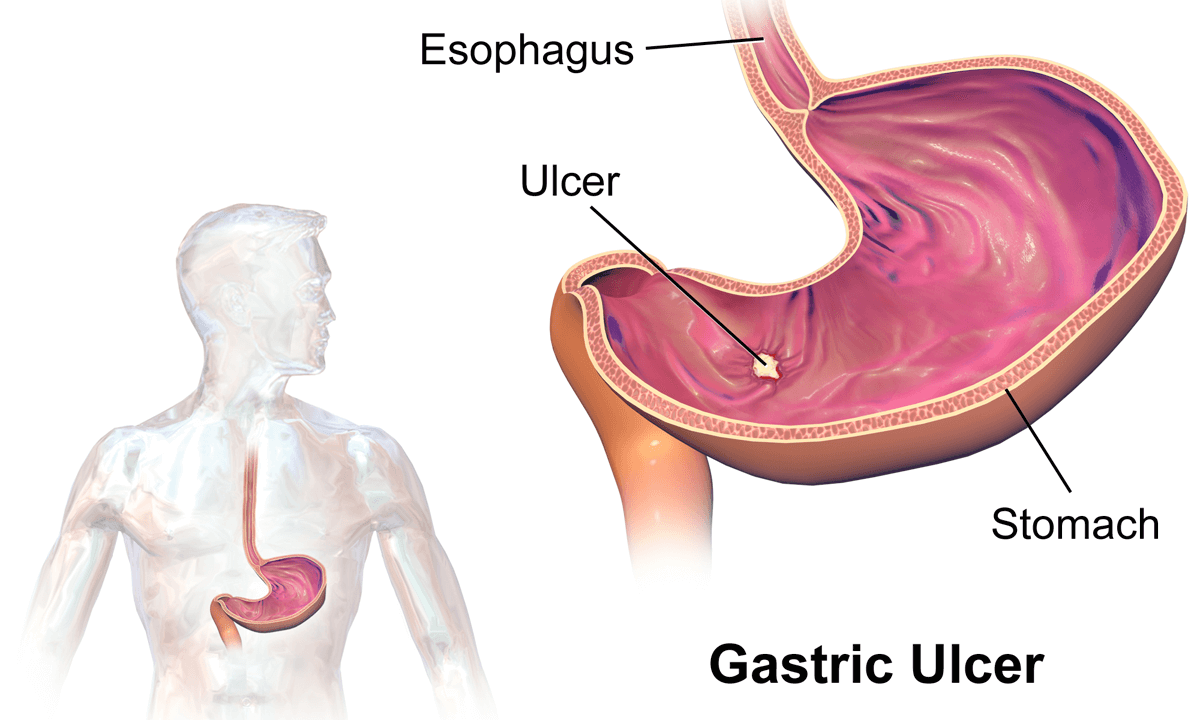 Consider under Peptic Ulcer Disease (PUD). PUD mainly refers to the presence of one or more ulcerative lesion in the stomach or in the duodenum.

More than 6 million cases per year in US, in Australia the annual ulcer incidence per 1000 population was 3.8 for duodenal ulcer and 0.7 for gastric ulcer. Approximately 70 000 Australians appear to receive initial treatment for a peptic ulcer each year.

It is estimated that more than 50% of the world’s population is infected with H. pylori, it increases with age. This infection invariably causes the active chronic gastritis. Pylori infection increases the risk of ulceration and bleeding in patients taking NSAIDS.

Classification: PUD is classified as

Gastric ulcers: Most often appears at the lesser curvature and gastric antrum
Duodenal ulcers: Occurs at the duodenal bulb.
Erosive gastritis: this is an acute mucosal inflammation of the stomach that does not extend beyond the muscualris mucosa.

Causes and risk factors: one of the major risk factors is Helicobacter pylori infection and second important one was chronic use of NSAIDS, glucocorticoids in combination with NSAIDS, other causes may include idiopathic, incompetent pylorus, lower oesophageal sphincter, impaired proximal duodenal bicarbonate secretion, gastrinoma. The common risk factors may include age, male sex, family history and smoking and alcohol consumption.

Diagnosis: the preliminary diagnosis is based on the history and examination which should be supported by the supper endoscopy – which remains the test of choice in this patient, which we did and confirmed that his presentation to ED due to upper GI bleeding is the ulcers in gastric antral region.

The standard care for PUD is to test for the H. pylori. However, we don’t have this facility at the hospital. Once the confirmation of the Pylori is done, which needs to be proceeded with standard treatment for Pylori infection.

Other diagnostic procedures along with upper GI endoscopy are:

One of the differentials in this case is Upper GI carcinoma or Malignancy: which can be ruled our using this method.

The goal of the treatment should be to provide the symptom relief and encourage the ulcer healing.

Criteria for ICU admission: Patients who are hemodynamically unbale because of the uncontrolled GI bleeding.
Recommendation for the specialist referral such as Gastroenterologist and surgical consultation

In our patient the main reason was suspected to be the use of NSAIDS, hence recommendation to stop the use of NASIDS and initiate the Proton Pump Inhibitors.

Standard care: For patients at high risk but require NSAIDS, better to use COX – 2 Selective NSAIDS and a proton pump inhibitor are recommended. They seem to reduce the incidence of NSAIDS induced peptic ulcers and subsequently the bleeding.

Misoprostol or sucralfate may be also useful in patients who must continue to take NSAIDS.

Standard treatment if of 2 antibiotics and a PPI for 10-14 days.

PPI or H2 receptor antagonist can used before being referral to gastroenterologist.

Which needs to be followed by eradication therapy:

Combination therapy is recommended due to increased resistance of Pylori to antibiotics.

Which can be either triple or quadruple therapy plus PPI for 10-14 days as per NICE 2014 guidelines recommended for 7 days trice daily.
Prognosis

What Ayurveda can Offer?

Ayurveda consider this condition under AMLA PITTA, one of the most common condition in the society affects all ages, classes and race. The main reason according to Ayurveda is predicted to me eating excess PITTA aggravating food such as spices, curries (CURRY) and worrying (WORRY) too much and eating too fast (HURRY).

If symptoms persist consult your healthcare practitioner, the information provided in this article is strictly for education purpose only. If you are looking for a professional Ayurvedic practitioner to help with our health condition kindly contact us at info@jeevahealth.com.au or Ph: 03 9399474.